Gain inside access to every goalkeeper training session, practice and drill over an entire MLS season in this special book that tracks New England Revolution’s progress from underdogs to the MLS Cup Final

Now this is comprehensive! Not just a few select soccer drills but an entire season’s worth! Part diary, part travel log and 100% goalkeeper coaching resource, Full Season Goalkeeper Training Program charts the experiences and demands of coaching a goalkeeper throughout an entire season, from preseason friendlies right until a cup final appearance at its finale

The game has never been more demanding for goalkeepers. They have to develop better technique, quicker reactions, increased focus and mental toughness to cope with the pressure of being expected to perform consistently every game. Nobody knows this better than goalkeepers playing an entire season in the professional leagues.

Full Season Goalkeeper Training Program gives you an inside view of what it takes to coach a goalkeeper throughout an entire MLS season. Written by New England Revolution’s goalkeeping and assistant coach John Murphy, this book details every training sessions, practice and drill throughout their 2002 season. This was a year in which the team went from underdogs to a seven game unbeaten streak which propelled them to becoming East Conference Champions and MLS Cup Finalists. 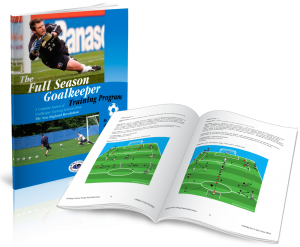 It was also a year in which their goalkeeper, Adin Brown, grew into becoming one of the league’s most effective shot stoppers. This improvement came a result of the vast array of goalkeeping drills and training exercises practiced by Murphy and Brown on the training pitch; the full details of which you can discover in Full Season Goalkeeper Training Program.

Whether you’re a New England Revolution fan or want to improve your goalkeeper coaching, this special book provides with a complete guide to training goalkeepers individually and as a part of the team. Starting from preseason tours of Brazil and Portugal through to charting the entire nine month MLS season, this is a must for goalkeepers and coaches wishing to see what it takes to coach a goalkeeper throughout an entire season.

“I think the book was a terrific resource for not only helping to show the balance between the separate technical work the GK should be doing, but then how to have that carry over into the team training. 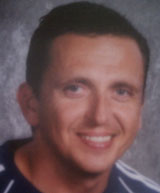 What I took from the book and will incorporate into my teams, is the balance and scope of what is needed both technically and tactically for the GK to perform within the team and have success. A great resource to take into pre-season with a ton of great ideas and activities for the GKs to be doing technically along with a great look onto how the GK is incorporated into team activities building toward the season and what the team is currently training. Another great book and resource!!”
Robert Schretzmayer – Smithtown Central Schools Boys/Girls Coach and NSCAA National Diploma holder.

During the 2002 season John Murphy was instrumental in creating one of the league’s toughest defenses. This grew from both his modern philosophy on the role of the goalkeeper and his soccer drills tailored for goalkeepers. Championships and cups are won with solid group defending, and it’s this ethos that comes through in the extensive array of training exercises and observations in Full Season Goalkeeper Training Program.

During the 2002 season New England Revolution earned the lowest goals against average during the playoffs and two individual call ups to the national team. This came from having defenders that knew how to work cohesively with the goalkeeper to create a tight defensive unit.

Too often, goalkeepers are trained in isolation due to the unique nature of their position. But there are many benefits to training goalkeepers with the outfield, including improved team spirit, a closer understanding between the goalkeeper and defenders and improved goalkeeper performance from practicing a wider variety of drills that replicate real game pressure.

Full Season Goalkeeper Training Program features over 100 pages of warm-ups, soccer drills and small sided games that incorporate the goalkeeper into team training. This means that as well as gain an inside look at how professional goalkeepers train and prepare for matches over an entire season, Full Season Goalkeeper Program will show you how to train the entire team to become a more cohesive unit that concedes fewer goals and can win more games. 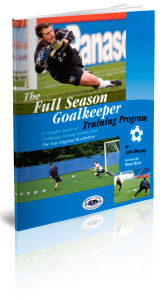 Over the last two decades, John Murphy has coached at all levels of the game. 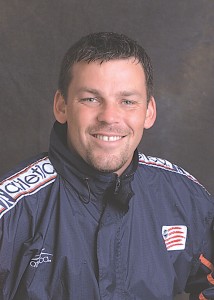 Murphy then took the step up to the MLS, helping the New England Revolution to qualify for three playoffs (2000, 2002, and 2003), win the 2002 Eastern Conference Championship and qualify for the 2003 CONCACAF Champions Cup. In 2004, Murphy then left to coach at the Columbus Crew, assisting the team to win the MLS Supporter’s Shield and the Eastern Conference Championship, with the second best goals per game average in the league. Murphy was also on the staff of two different coaches that won MLS Coach of the Year awards, namely Steve Nicol in 2002 and Greg Andrulis in 2004.  From 2005 to 2008, Murphy moved to become Assistant Coach and Director of Player Development at the Colorado Rapids.

In 2009 John became the first American born coach to work in British football when he joined Livingston FC of the Scottish 1st Division. While serving as head coach for two months, John oversaw a dramatic 2–1 victory over English Championship side Plymouth-Argyle. 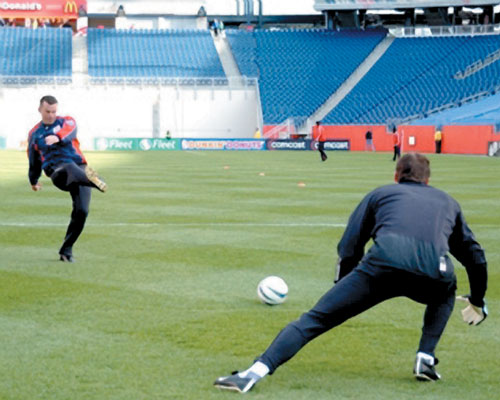 Full Season Goalkeeper Training Program covers a comprehensive goalkeeper coaching schedule for an entire season with over 100 soccer drills and training exercises which are explained with detailed and easy to read diagrams:

Abilities of a quality goalkeeper – The first section identifies the tasks and roles required in training goalkeeping technique, decision making, distribution and more.

12 month calendar – Shares levels and intensity of training depending on the stage of the season or time of year.

Complete 9 month MLS training guide – Featuring over 100 soccer training exercises and drills for goalkeepers, the bulk of the book covers exactly what it takes to coach a goalkeeper over an entire nine month MLS season. This includes drills with medicine balls, with mini hurdles, crossing, distribution, square box training, improving movement speed and more. Murphy also writes about the team’s triumph as East Conference Champions and disappointment at being runners up in the MLS Cup Final against LA Galaxy.

Favorite soccer drills for goalkeepers – The book concludes with 10 of Murphy’s most highly recommended soccer drills and training exercises. 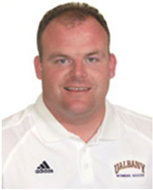 “This goalkeeping book is an important part of my coaching library. It’s an excellent manual for both full-time goalkeeper coaches and field coaches without a dedicated goalkeeper specialist.

Although the manual illustrates a full season of training plans for a Major League Soccer team, each exercise can be easily adapted for any skill or age level. It also gives a behind the scenes look at the preparation, trials and tribulations of a professional team, its coaches and the training of its keepers. A read that I certainly recommend!”
Rob Parker is currently the goalkeeper coach for the Union College (NY) Women’s Soccer program. He has been training and coaching keepers at the collegiate level for 15 years and the youth level for 20 years. 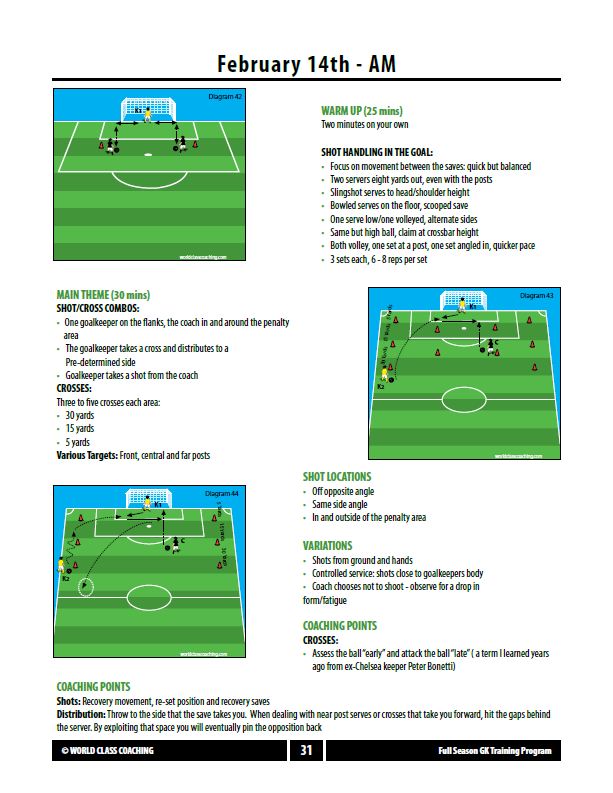 What you will gain from Full Season Goalkeeper Training Program

Full Season Goalkeeper Training Program gives you an inside view of what it takes to coach a goalkeeper over an entire season:

There are plenty of goalkeeper training books to choose from but few contain the volume and variety of goalkeeper drills and training exercises covered in Full Season Goalkeeper Program. Coaches of all playing levels can benefit from the inside view of what it takes to manage training sessions over an entire season and to give goalkeepers the challenging drills they need to improve, to concede fewer goals and win more games for your team.

100% ‘no quibbles’ 6 Month Money Back Guarantee

WORLD CLASS COACHING is recognised globally for the quality of its soccer coaching resources, which are used by over 40,000 soccer coaches from around the world. We wouldn’t be offering Full Season Goalkeeper Training Program unless it achieves our exceptionally high standards. However, if you are not 100% satisfied with the quality of the Full Season Goalkeeper Training Program after six months then please contact us for a no quibbles refund. 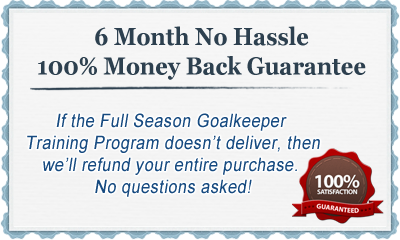 Sometimes it can be a struggle to think of new goalkeeper drills and training exercises that will keep them challenged over the course of a season. Full Season Goalkeeper Program includes over 100 so you need never be stuck for ideas again.

Your goalkeeper will benefit from being given the opportunity to push themselves through practicing drills that replicate real game pressure and the variety of situations. They will also be able to train with the outfield, helping to improve team spirit, cohesiveness and defensive performance.

Along with the extensive collection of goalkeeper drills, Full Season Goalkeeper Training Program describes the challenges, euphoria and disappointment of coaching a team all the way to a cup final then falling at the final hurdle. This makes it an insightful book for coaches of every team aiming for success, whether you support New England Revolution or not.

P.S. Full Season Goalkeeper Training Program covers every single goalkeeper training warm-up, drill and exercise over an entire season. In 2002 New England Revolution when from also-rans into a strong defensive unit that went on a winning streak that took them to the East Conference Championship and the MLS Cup Final. This book shows you how, every step of the way.

P.P.S If you are not 100% satisfied with the quality of the soccer coaching resources in Full Season Goalkeeper Training Program after six months then we will refund your purchase in full, no questions asked.

Get Your Copy Of