I often times challenge my field players to hit “ blind” crosses to space, anticipating a target player will get there. The searching ball/shot is a staple of every soccer game at every level; however few keepers actually regularly train to save these “ blind” shots during the run of play. I actually instruct my keeper to call out when they are blind or “can’t see” the ball as a cue for the defender to step up pressure: multiple times when coaching younger teams I have witnessed just the opposite – keeper yells “ can’t see” and the defender steps away from the ball allowing the attacker a clean shot. All humor aside, these “blind” situations are part of almost every soccer game – especially on free kicks- thus keepers should regularly practice defending them. Just as the attacker can anticipate the open space to serve or shoot too, the keeper can anticipate the open space and move there to make the save, whether they can actually see the ball or not- here is what I mean. 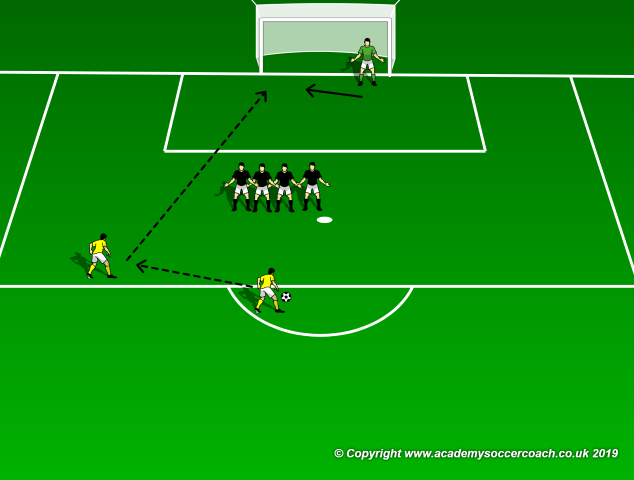 Above is the traditional free kick set up. The keeper sets up the wall to block off part of the goal and then stays in the open space, with a view of the ball, forcing the attacker to make the toughest shot available. However, if the ball is passed off in front of the wall the keeper will be “ blind” for a moment– (shown here on a free kick for demonstration purposes this blind spot is a common occurrence during the run of play). If the attacker receiving the pass shoots first time, the keeper simply has to commit to the blind space on the near post, set up at a good angle in case the strike goes back far post and again, force the shooter into the hardest shot possible. So while most teams practice this scenario for free kicks, too many don’t for similar situations during the run of play, for example: 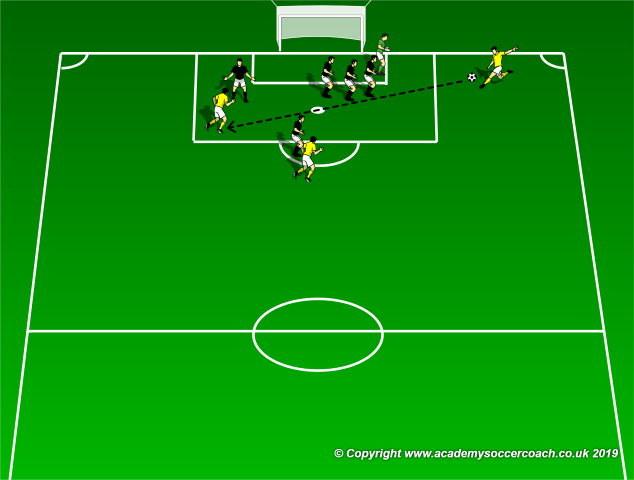 This is a common drill when focusing on attacking and defending – but what about the keeper here? What I see most of the time in this situation is the keeper gets frozen trying to figure out where the ball is going to come from and end up all in short order – and we are talking mere seconds if that – and there is seldom enough time to both think and react. So while I am certainly am an advocate of the “ thinking player” , in this situation I say do the thinking ahead of time and know to react quickly and get to the blind space – which will involve a double move. 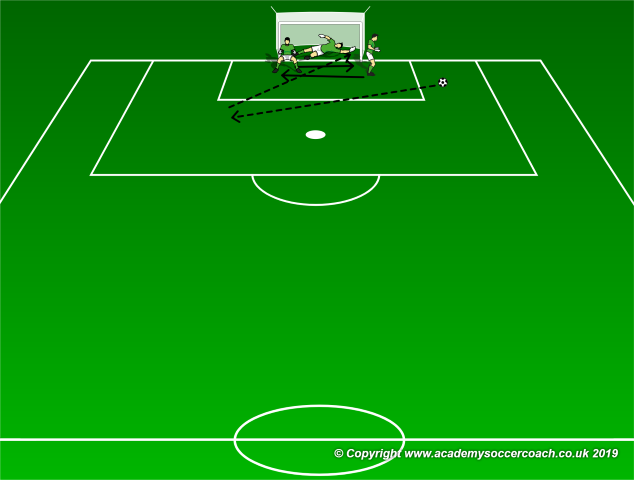 As shown above, just as the path of the ball is going to go across and then back – the keeper’s movements should mirror this and travel with the ball. IF it comes through a blind area, hopefully the keeper will be in position on the way across to make the save by default. As soon as the keeper is set, they should be prepared to move back as the blind area is now on the opposite side. Again, what I am talking about is committing to the pattern of movement which happens MOST of the time – especially at the high school level where attackers are less patient and more excited in front of goal. Instead of asking your keeper to freeze, think and make a read when they cannot see, just ask them to commit to a similar pattern of movement as they anticipate the ball will take. Your keepers can practice it like this: 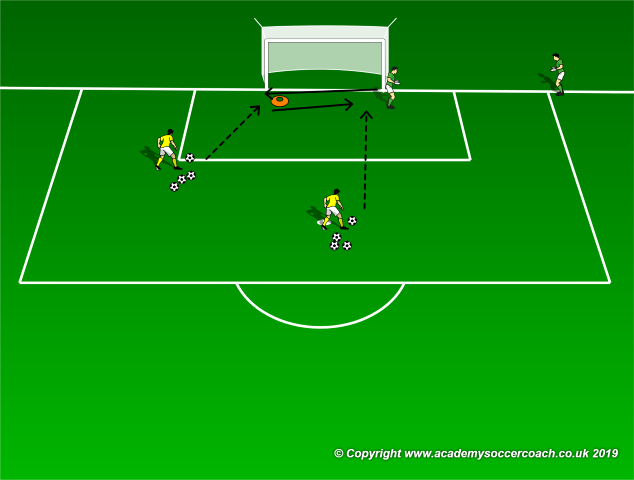 Have one keeper set up in the net as shown above. The other keeper will serve as the starter by yelling “go” for each attempt. When the starter yells “go”, the keeper in the net turns and moves across to the far post – marked with a cone. To start, the striker on the far post waits for 2 seconds after the starter yells “go” and then hits a far post shot. The keeper in the net attempts to make this save however, 2 seconds after the first shot is taken, an additional striker at the penalty spot will hit another shot into the back post. The keeper in the net has to move quickly after the first save to try and make the second save as well. As the drill progresses, the time between shots can be reduced to 1 second and then even more quickly should your keeper master both the 2 and 1 second delays.

Coaching Points
The idea here is for you keeper to commit to a pattern of movement when they cannot see. Obviously, if the keeper is able to see, like when the attacking team attempts to set up again for example, then the keeper can take the time to set up for what they can see, however, the fact remains too many goals are scored on the back post because the keeper, especially young ones, is trying to figure out where the shot is coming from( and going too) when they simply have too little time and too much space to cover. Combine this commitment with a defense which refuses to give up the center of the net and your side will allow fewer goals, but it all starts with the keeper understanding how to make the “blind” saves. Good luck!