When I was getting my USSF D License I remember the instructor saying “If you are working on defense, work on defense. Don’t worry about what the attackers are doing!” What the instructor (Coach Parrish ) was trying to do was make sure the coaches understood the need for clarity and purpose in training, basically staying on task. This is simple when the drill is simple, however there are tons of times when drills can be dual, triple and even quadruple purpose especially when they are game / scrimmage related. This is one of those drills. In an effort to make Coach Parrish happy however, I will ask those using it to focus only on the keeper work aspects of the activity.

We have all asked our keepers to “command the box” . I have found a great way to demonstrate / practice this is through team handball. (the other purposes are overall team work, movement off the ball and team communication ) Below is a demonstration of the game and the setup, along with some keeper specific aspects which can be used as a progression. 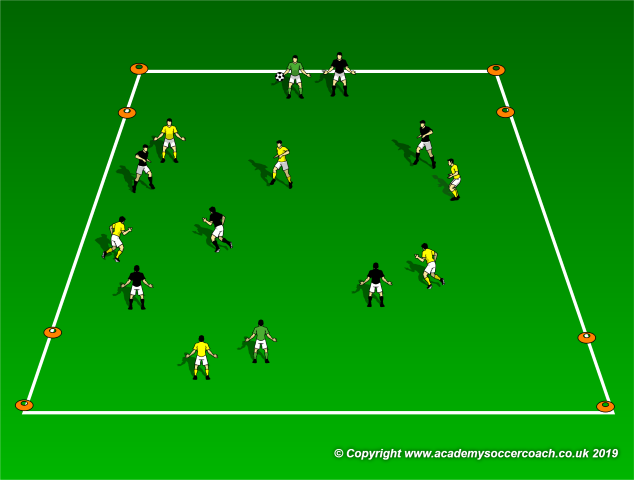 Set up a field approximately 20 yds wide and 40 yds long. The final 10 yd sections on each end are “end zones”. The keepers are the designated defensive players in each end zone. Play starts with the keeper serving a ball into a team mate who, don’t be shocked soccer purists, catches it in their hands. Once a catch is made, the player with the ball must stop moving, and has to pass to a team mate, who also must stop when the catch is made and pass. The ball cannot be slapped or taken out of the ball carriers hand and defenders must stay an arms length away to give room for the ball carrier to pass. The ball carrier has 5 seconds to pass or it is a turnover. Also, any balls which are not caught and hit the ground are turnovers, so the defending group does not have to intercept passes cleanly, just knock them down to the ground. All turnovers are left where the ball was given up or hit the ground. Goals are scored initially by sending a pass into the target player, who is defended by the goalie. Initially no other players are allowed inside the end zones but can switch out target players after a goal is scored. 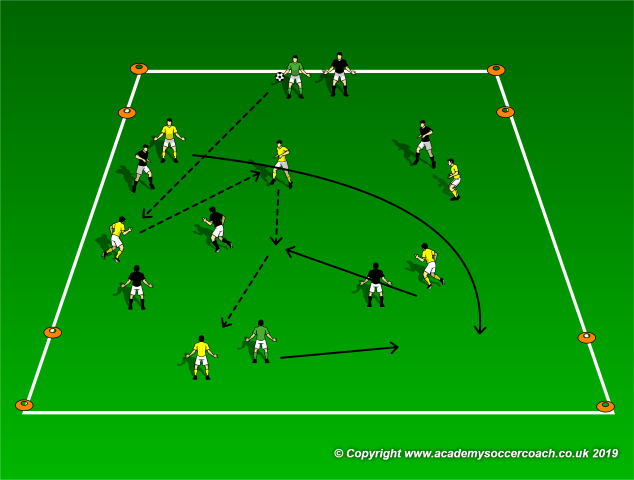 The idea is for the keepers to read the field, and play the BALL when it is served in, not get caught up in the movement of the other players. After all, in a game, when the service is coming in, the keeper’s job is the ball. The diagram above shows how initially the keeper could get drawn away following an open player. 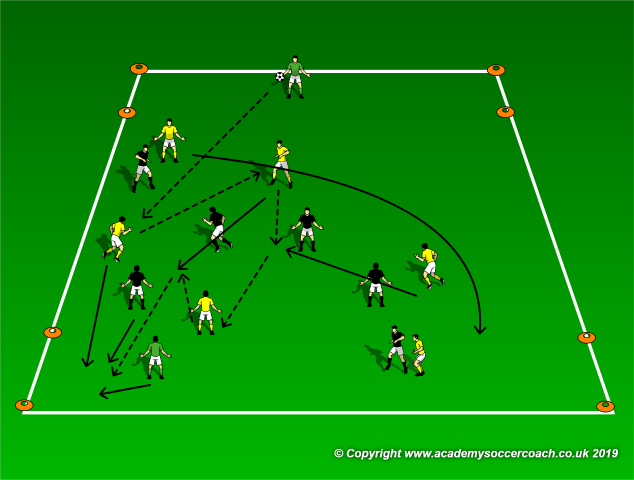 Coaching Points
The free play with the keepers restrained to the end zones should be the bulk of the exercise. Here the coach should make sure the keepers are reading the field, playing the ball, calling “KEEP” when going for the ball and making a good distribution afterwards. As a final progression, release the keepers from the end zones and let them play the entire field.