Be a Distraction In Goal

I was first introduced to the concept of being a distraction in goal through what I felt at the time was a poor choice of words. I actually always wanted to be a full time keeper but as I was always small – I was only 5 feet tall 100lbs when I graduated high school ( compared to my now towering 5’8 170lb frame ) -I never really earned any serious consideration. I was a decent striker so even though I was always destined for the field, I took every chance I could to get in goal and was designated as the emergency keeper as few times. This is where I was told to “ get big “. Getting big wasn’t my strong suit but when a coach explained further the need to simply distract the shooter, this made more sense. While “ getting big” was certainly a part of being a distraction, I found there were other ways to get a shooter off their mark as well, many which could be practiced. 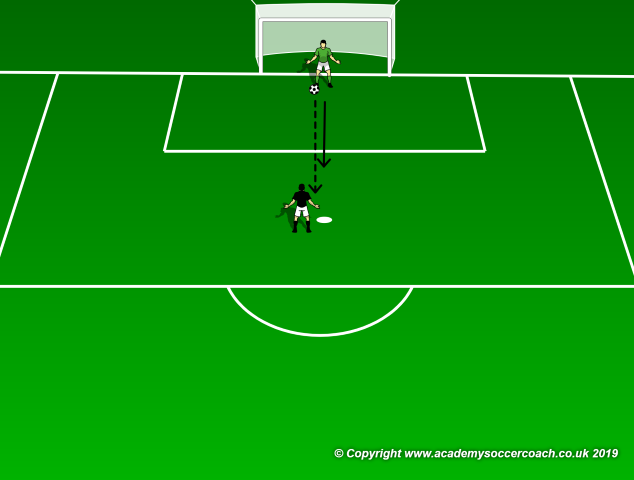 As shown above, one of the best ways to distract a shooter is just to shut down the space. ( I should note here, this can be a really fun and useful practice, but players should be encouraged to be careful and not get reckless when either charging or getting charged ). Let the keepers send a ball out to the pk spot where the shooter has 2 touches including the shot as the keeper closes them down. The keepers should get low, wave their hands and even yell as the shot is being taken. Just like in golf, a well timed “ AHHHHHHHH” can make all the difference in a perfect drive or a slice. 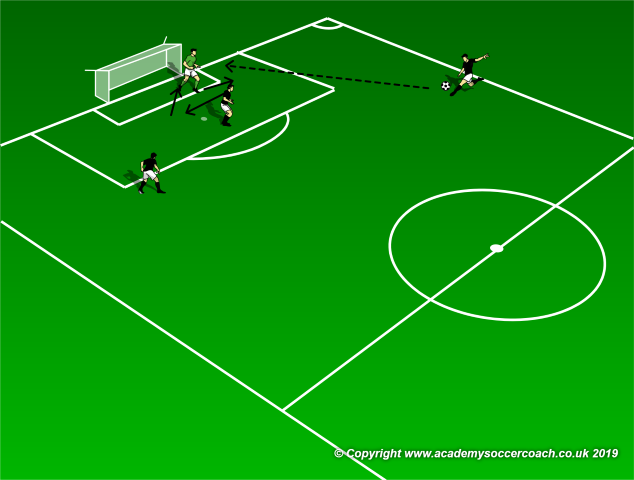 Another way to distract the attack in general is with some well timed movement. Too many times keepers get set up early for a cross and allow the near post runner to get too good of a read and run on the space. Without getting out of position, a keeper can move up, across and back and still be in position to make the save. This will throw off not only the shooter / server but also the attackers running in to finish. Set it up just as it is shown above and try it. Free service to a near and far post run. With a more active keeper, the scoring percentages will go down.

Finally, as shown below, a vocal keeper will always be a distraction and while I don’t condone trash talking, a bit of honest trickery doesn’t hurt. What I mean is, keepers always seem to yell “ AWAY” or “ CLEAR” or “ KEEP” while attackers seem to yell “ HAVE IT” or “SHOT” or “LEAVE”. Both sides seem to use “MINE” but in a box with 20 players in it, just who is “MINE” is not always clear. I have seen keepers ( mine included ) stifle a wide open shooter by yelling “LEAVE” as they pounced on the cross. Dirty pool? Not in my opinion. Again, set up a finishing drill with a near and far post run and with out telling the attackers, have the keepers yell out common attacking words to see if they can throw off the shooters a bit. 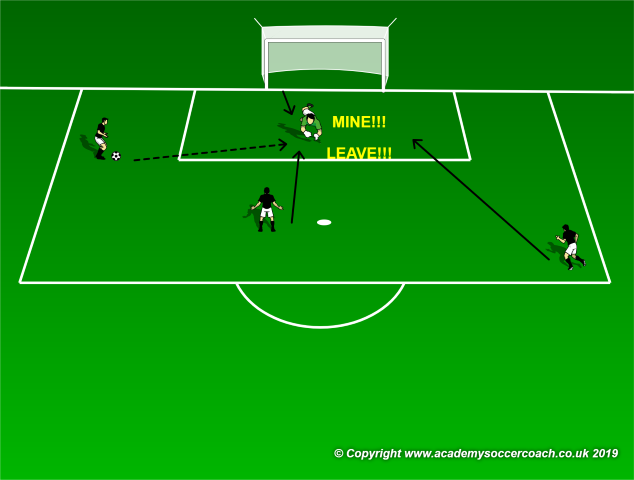 Coaching Points
This is a great change of pace practice for the entire team, but the tenants are useful. In addition to waving arms and a wide stance ( getting big ) a keeper who isn’t afraid to come out on a shooter and close down the space, take up the finishing space with movement on services and use vocal cues and deception will come up with a few cleaner sheets than one who doesn’t. The coach should work through these activities first and then use a half field scrimmage or corner kick drill to put the idea of being a distraction into play.