A vocal keeper is a must, however there is a saying in the educational field which I find holds very true in sports as well – “ Just because you can talk, doesn’t mean you can communicate”. One of the first things I usually find myself doing with new teams is explaining to them everyone here knows everyone’s name – which is usually a staple of “ team communication” – several players yelling out the name of the player with the ball. So for keepers, once they have learned to call out marks and bark at their back line to push up – what else can they do to effectively “ communicate” and how can this be worked on?

In the diagram below we see a very common defensive scenario. It is also a scenario in which the outside back, ( shaded in red ) is being set up for failure. The outside back has waited too long to close down the wide attacker and is in a “catch 22”. Step out now and a simple one two has the keeper facing a shot. Hold the line and a well hit service or run to the end line will open up a shooter. This is where Supporting Communication could have helped. Why didn’t the outside back close this down earlier?

I see this too much and then the keeper will often times get on the back in a negative manner after the fact. I do not allow my players to do this. I always tell them “ The only player I want being negative after the fact is the one who owns a time machine.” Put that effort into encouraging and supporting each other EARLY. A keeper should absolutely encourage early pressure when their back line is numbers up ( as shown below). This confidence and positive support will transfer across the pitch and besides, if your back gets beat at midfield, they still have a lot of room and time to recover. The keeper should have been more proactive and “ supporting here”. 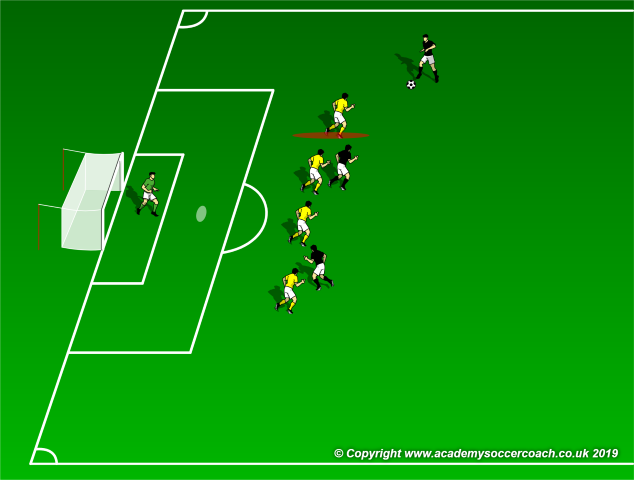 Here is an example of when a keeper should use informative communication, i.e., let the defenders know what THEY are doing. 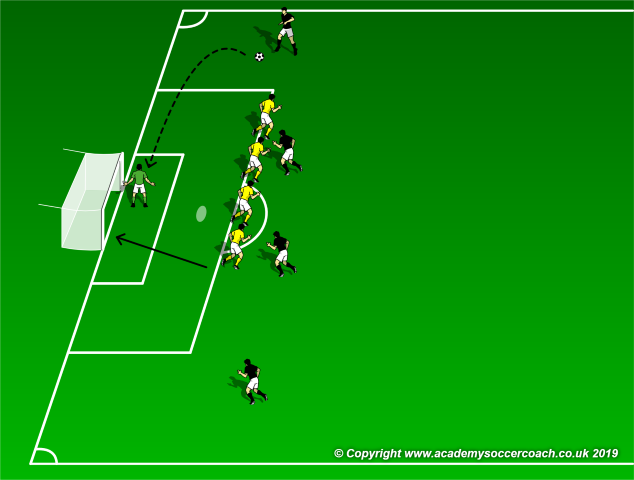 Above we see a keeper faced with what to do with either a crossing service or a near post attack. IF the keeper goes out to shut down the angle or up to intercept the cross, the back post / line will need to be covered. IF the keeper is going to hold their line, the defenders should continue to mark tight. Even though this happens fast, the keeper is the only player who knows what they are going to do. Seconds count. Even if the keeper simply yells “ GOING OUT, or GOING UP “ as they start to move, this could be enough time for the defenders to get in better defensive position instead of getting beaten by a run AND a pass.

Working on this stuff at practice is fairly straight forward and as a bonus, really fun for the keeper and the team. First, set up as shown below for the keeper to work on supporting communication: 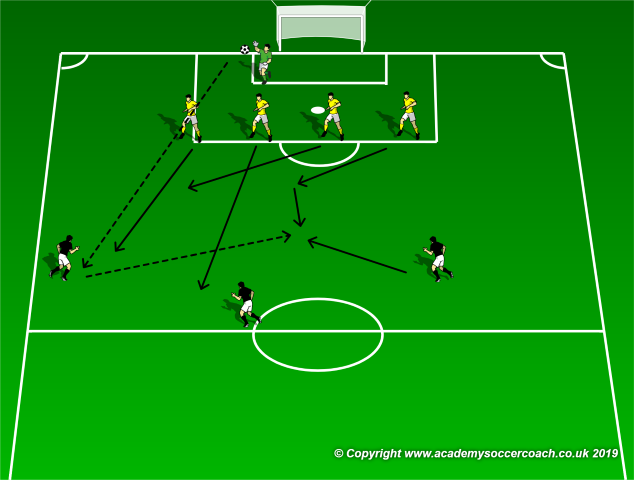 Groups of 4 defenders take on groups of 3 attackers on a half field. Play starts as shown ( above ) with a keeper distribution to a wide attacker. The idea is for the keeper to encourage the outside back to close down aggressively, and the rest of the defenders to shift up and over in support – hoping to steal a square pass to the opposite outside attacker. It is all positive, all aggressive here. IF the defender gets beaten, more encouragement to get back and recover is the focus ( as shown below ). 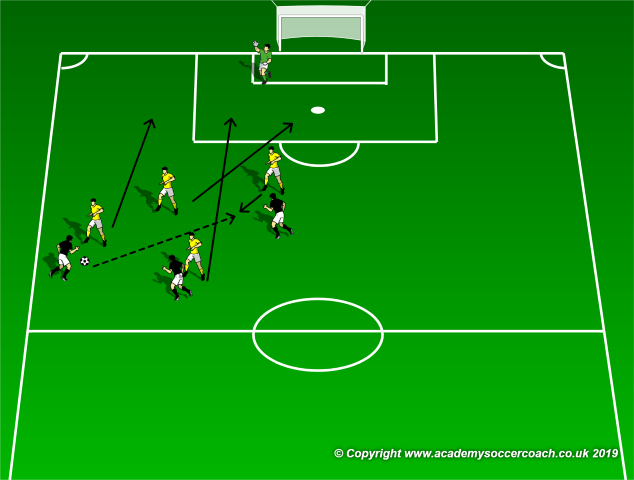 Again, simple enough, almost simple enough not to work on but I promise a few of these sessions, if for no other reason than letting off the pressure of allowing goals and letting the defenders be more aggressive, will improve the overall positive communication of the whole squad.

Informative communication is much the same: 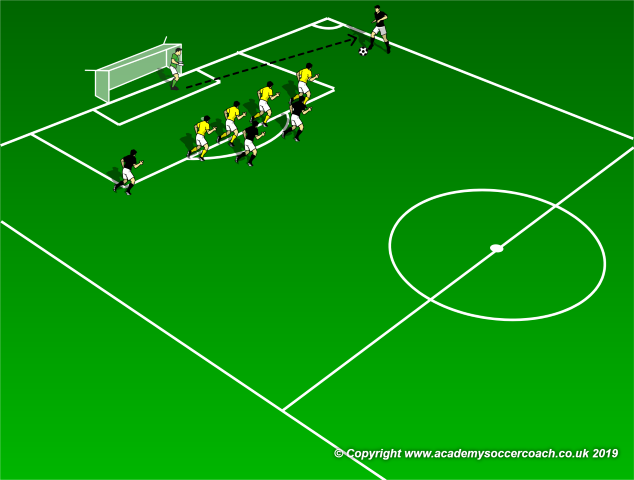 Set up as shown above, 4 attackers vs 4 defenders. Play starts with the keeper sending the ball out to the wide attacker, who must serve the ball within 2 seconds and cannot come in to finish until the ball is across the goal. The goalie MUST yell out what they are doing before or as they start to make a play on the ball. IF the keeper comes out or up – a defender must at least drop off and guard the line on the back post. Just like the first drill, this is all about the keeper being decisive AND communicating that decision to his defenders.

Coaching Points
By adding supporting and informative communication to the standard instructional communication, a keeper will enhance their communication and leadership skills while building a more positive cohesive defending unit. The coach should encourage this by making sure everything happening in this session is positive and proactive, unless you are that person I have been looking for who has the time machine.