One of the tell-tale signs of good team is how they warm up their goalies prior to a game. Good teams ( coaches ) understand practice activity and pre game activities are, or at least should be, similar but different animals. Especially in youth sports, practices are a mix of individual skill training, tactical awareness training , teamwork/ gamesmanship and match specific training. During pre-game however, the plan should already be in place, the skill work should be done and the focus is more about being warm and loose and prepared to use the skills needed to win the game.

This is especially true with the keeper. So while I see tons of pre-game “ ground” exercises used as warm ups – (which are fine as the INITIAL warm up)- and tons of pre-game 1 v 1 shooting – what about the rest of it? How many keeper warm ups also include – pks, corner kicks, free kicks ( including working with a wall ), punching vs parrying vs catching, handling services and distributions? Here is a good pre-game warm up which will not only “ train” your keeper, but also get them ready for the match at hand. 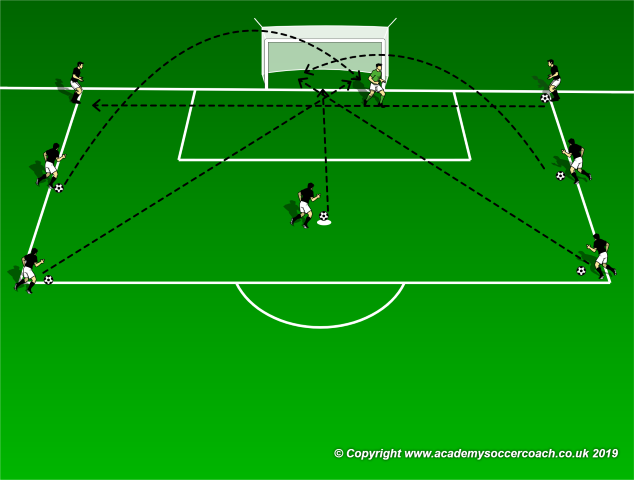 As shown above, this progression helps the keeper deal with many of the common shots they will face during a match. Starting at the top right, have a player – usually one of your “assisters” slide the ball across the goal to the opposite side. The keeper should try to smother this. Working down clockwise, have an intermediate player chip a ball in so the keeper can catch/punch/parry the ball. The shot from the corner of the 18 should be a rocket driven hard to the far post. Next, a penalty is taken and then the progression is continued around the other side continuously progressing from right to left and left to right. In just 15 minutes or so, after the keepers initial stretch and warm up, the keeper can face 5- 10 shots, services and penalties from several common game related angles. 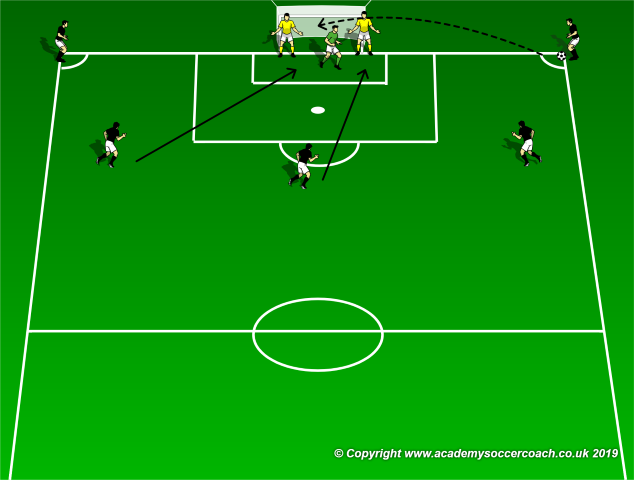 As shown above work with a corner kick to start the next progression, with a defender on each post and two crashing attackers once the keeper has handled a couple free services. 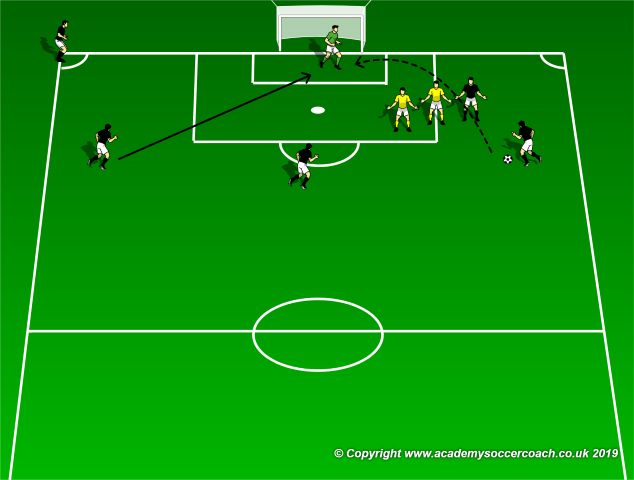 As shown above have the two defenders and corner attacker step out to make a 3 man wall, which the attacker just outside the corner of the 18 attempts to hit a free kick over ( the finishing attacker shown is optional). For the free kick taken from the center, the 3 man wall moves to the middle and is joined by the attacker who just hit the service to make a 4 man wall.

The progression is then continued around to the other side. Again, 5-10 minutes of this and the keeper will have faced more free kicks and corners than they may in the game. Finally, as shown below, have the keeper make a progression starting with a goal kick. The kick is initially taken out wide to a waiting defender, who the plays it right back for the keeper to scoop up and distribute ( throw or roll ) to another defender waiting on the opposite side. This defender plays the ball back for the keeper to reset for a goal kick, and the progression is made back around to the other side. This is done for 5 to 10 minutes as well. 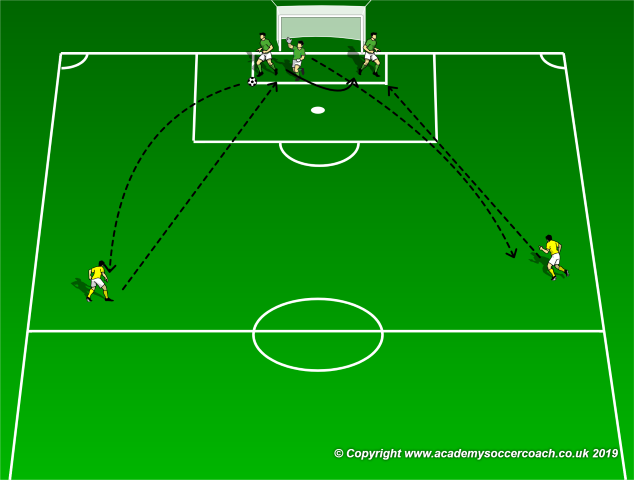 Coaching Points
Including an initial warm up and stretch, this whole progression will take between 35 and 45 minutes. I usually have my teams arrive at a game 1 hour before match time which leaves an additional 10 – 15 minutes for traditional shooting drills as a final part of the warm up. Feel free to modify this as needed, using as few or as many players ( this is a great position specific warm up for all players) as desired. The main idea is to progress around to include shots from game like situations and this is a simple thing which will go a long way to not only train your keepers, but also make sure they are well ready for the match. For those who also prefer possession work pre-game, different groups can be used with each progression to make sure all the field players have helped warm up the keeper, worked on some match specific scenarios and gotten in plenty of passing and possession.