Getting Your Chest on the Ball

“ You play goal keeper with your feet, not your hands.”….. “ And really, you are trying to get your chest to every ball.” These two statements rocked my youthful understanding of goal keeping as at 10 years old I was really really sure being a goalie was all about using your hands. What my coach was trying to get out of me was a simple improvement many of us can get out of our keepers, especially young ones: better footwork and increased range of motion from the arms – plus, the ability to safely smother a few more shots rather than bat them back into the danger zone.

Just like the goal of every academic test is to get 100%, the goal of every save is to be in position to trap the ball safely into the chest and start the possession going the other way. Just like testing, the 100% isn’t always going to happen, BUT if 100% is the goal there will be far more A’s and B’s than C’s and D’s. In the net, if the goal is to get every ball to the chest, then those near misses from poor footwork and those flubbed rollers from not going all the way to ground will turn into saves. I guess in sports this improvement is like going from an F to an A in the classroom. Simple concept, often overlooked but will yield big gains if given some work.

Set Up
As shown below, have a couple keepers work together moving side to side, up and down and forward. To start off the balls are thrown. The idea is to bring the ball into the chest, from directly in front of the chest. Make sure the keeper making the save is pushing off the inside foot and taking the extra step to get their chest to the ball, not just leaving from where they start ( between two cones place about 3 ft apart). 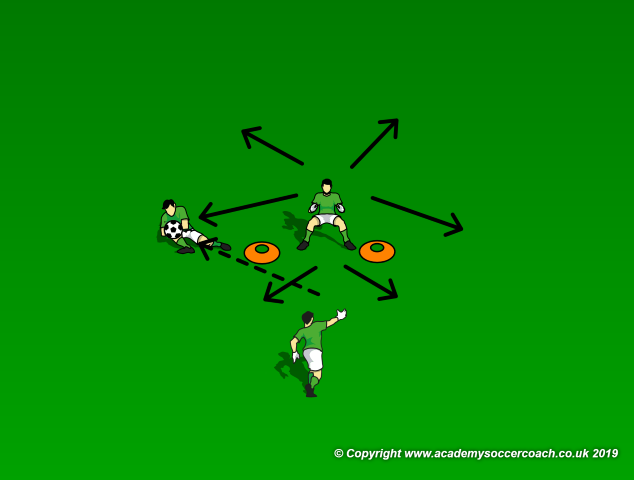 Progression 1
Next, bring on your 4 -6 best shooters and practice as shown below. The shooters start at the penalty spot and the keeper starts at the top of the 6. When the keeper starts to back pedal the striker takes a shot to the corner. To start, the shooter will tell the keeper where the shot is going. At the moment the ball is struck, the keeper should commit to trying to trap the ball into the chest. As a warm up for the shooters, the shots should initially come at ½ to ¾ pace so the keepers can get to their chests completely to them. Keepers rotate every 4-6 shooters and after each rotation the speed and pace should increase. 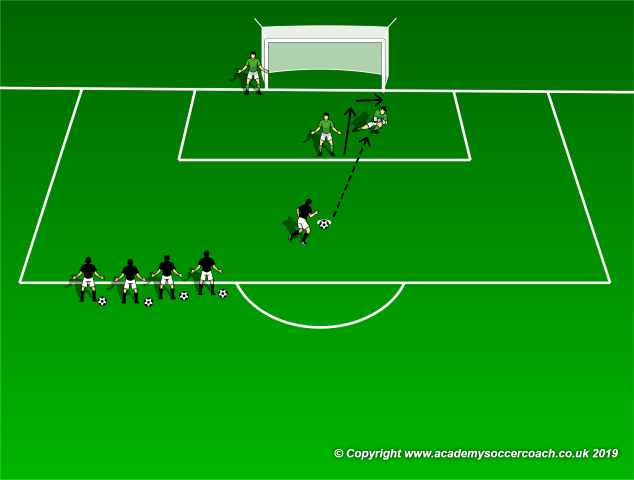 Progression 2
As shown below, change the format a bit to involve a service across the box to a shooter who will attack the near post but then send the ball across for either a far post shot or finish to a crashing attacker. The goal is the same, smother the cross. While the diagram shows this happening on the ground, it can also happen in the air. This is perhaps the most game specific need for this skill as winning a cross cleanly both stops an attack cold but also sets up an almost definite counter. Groups of two can rotate in on multiple keepers. 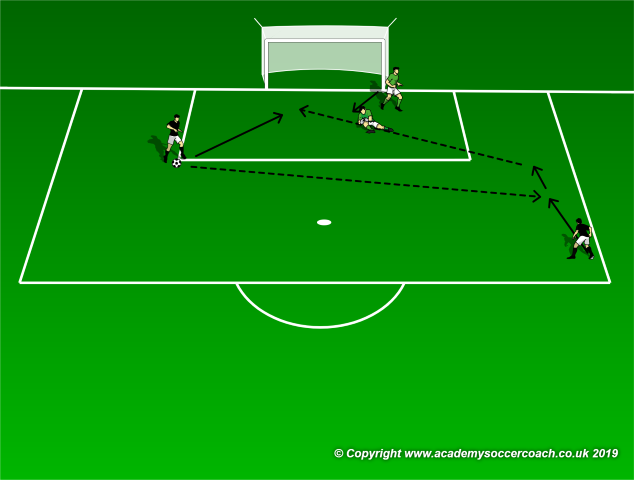 Coaching Points
By default this drill will put the keepers in better position to make all types of saves because if they are getting their chests closer to the ball they will have increased range of motion with their arms. However, the added focus on the footwork and taking that extra inside step to get the chest there will result in fewer “flubs” and second chance goals all while creating more counter opportunities. The coach should focus the keepers on the overall goal and proper footwork during all 3 activities.