The follow three practices target the development or maintenance of agility and reactivity that are specific to the position and role of a goalkeeper. Through these practices we also develop quick footwork, quickly getting into position with reference to the position of the ball with the goal, establishing the correct body profile (stance), and when and how to dive correctly to make a save. 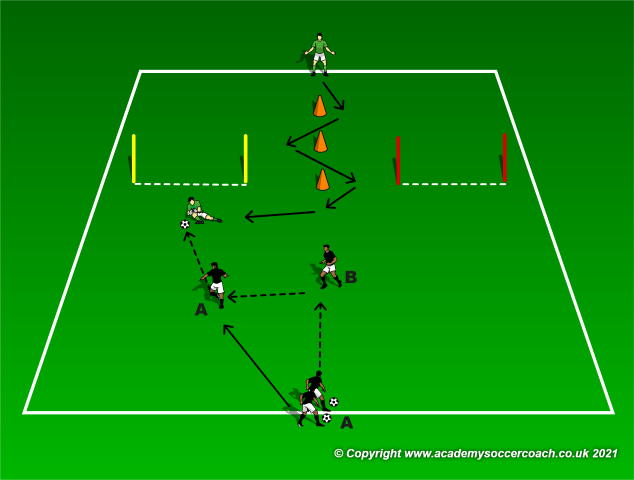 Description: The goalkeeper side steps through the line of cones prior to get into position to either move towards his right or his left to save player A’s shot after the latter wall-passes with player B to finish on either the yellow or red goal. The goalkeeper must quickly recognise where player B lays off the ball to player A so to quickly move into position in the correct goal to save the shot. Player B should be positioned 12 to 15 yards in front and in between the two goals. To increase the difficulty of the practice, player A will be positioned closer to player B thus reducing the time for the goalkeeper to quickly move in the correct direction to make the save. 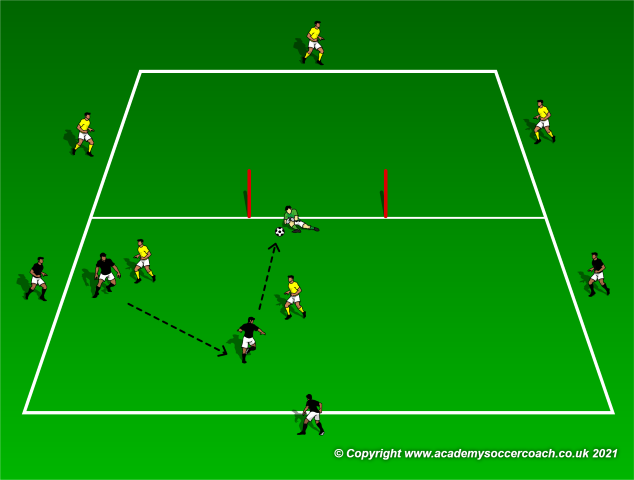 Description: The practice area measures 30 yards by 20 yards and which is divided into two zones with a central goal positioned on the mid-line. A goalkeeper guards the central goal. Each team has its own half from where they are allowed to score. A player for each team is positioned at each side in their own half. Two players from each team roam inside the area. Therefore in their own half, teams will have a numerical advantage of 5v2. The players on the perimeter are also allowed to score. If a goal is scored or won by the defensive team and played into the opposite side, the goalkeeper must quickly adjust his position to protect the goal from a different angle inside the other half of the practice area. When the goalkeeper makes a save, he serves the ball to any other player of the opposite team in the opposite zone.

Practice 3: Adjusting quickly to close down the shooting angle 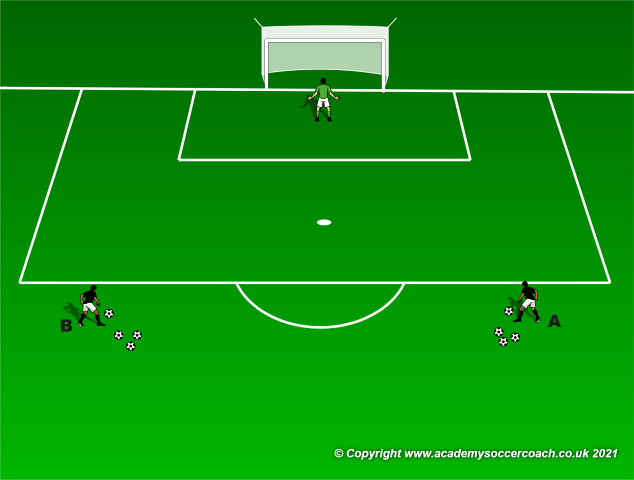 Description: Two servers A and B are positioned at different angles outside the penalty area. The goalkeeper faces the opposite direction (towards his own goal). When the coach calls out the name, or letter, or number representing the server, the goalkeeper must quickly turn to save the shot from the respective server. To increase the level of difficulty and make the practice more complex, when the coach calls a server it will be the opposite server who takes the shot on goal. To make the practice even more challenging we can increase the number of servers and have them dribble their ball randomly, thus continuously changing their angle in respective to the goal. 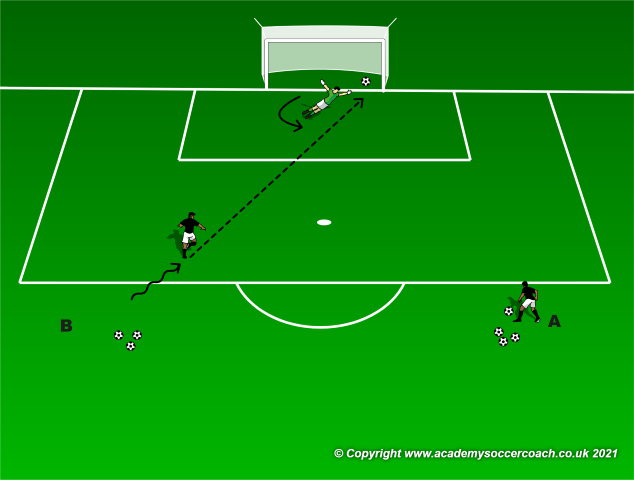 The first step should always be simple for both the goalkeeper and the servers to understand. From here we can then progress the practice further and according to the developmental requirements of the goalkeeper.