How to Call For the Ball

In almost every game, there are going to be those moments where the keeper and the defenders both have a play on the ball. While we all know the keeper can and should call off the defense, most of the time coaches just go with any outcome which doesn’t result in a goal as the appropriate play. We may just yell “Call it” to the keeper or “ Listen to your keeper” to the defense and hope for better next time. However, from a developmental standpoint ,i.e. practice, the keeper should call anything they are making a play on and the defenders should “back off” and allow the keeper to make the play, regardless if the keeper actually makes the play or not.

The idea here is certainty. Certainty is a strength and will create definite, predictable outcomes. Uncertainty creates confusion and unpredictable outcomes. So while we will all take anything which doesn’t allow a goal in a game, the best course of action in practice is to steer your keeper and defensive unit towards the certain outcome – if the keeper calls it, the keeper gets it.

Set Up
This drill is best done with at least 2 keepers, if your squad only has one dedicated keeper, insert your back up keeper for this activity. In the face of goal, ( shown below ) two keepers wait for a service from the top of the 18. When the ball is served, the first keeper to call it ( by yelling KEEP! or KEEPER! ) makes the save. Another ball is served immediately – presumably for the second keeper to call and save. IF, the keeper who saves the first ball can make the save and call the second ball as well, they will get a chance at two saves. Play is reset after every two services. The keepers cannot call for the second save until after the first service is saved. The server ( preferably an additional keeper or coach ) should make sure at the start of the drill the second service is hit before the first one can be saved. This gives the keepers equal time to warm up and get the feel of the drill. As the drill progresses, the server can take some time between the first and second service and create some friendly competition between the two keepers. Balls should be served in a variety of ways – from the ground to a lob with the only condition being all balls are served on frame. 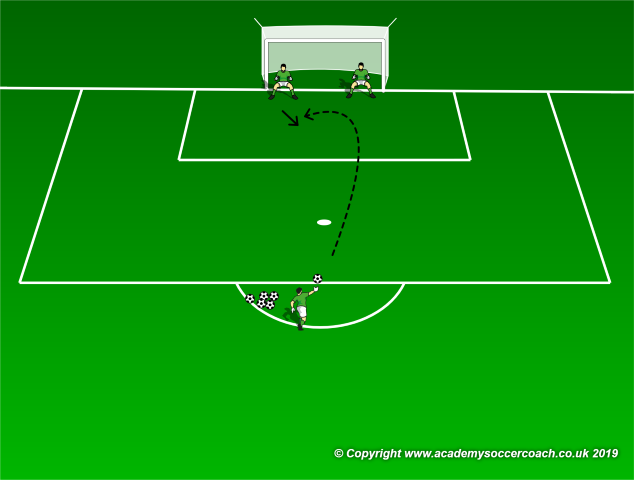 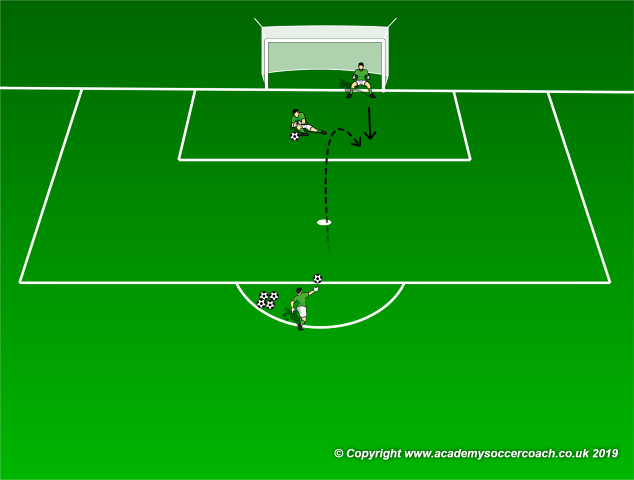 Coaching Point
It is important the keeper actually yell KEEP or KEEPER as opposed to MINE or I GOT IT. Ideally all players are letting each other know when they are making a play on a contested ball and MINE or I GOT IT does not definitely mean KEEPER, especially in the heat of the moment. Again, be certain – make sure the keeper is saying KEEP.

Progression 1
Once the keepers have gotten the hang of calling for the ball, bring in 4 to 6 defenders. Start them one at a time running in from the post. The services now may be anywhere inside the box. One defender at a time comes out for each service. If the keeper calls for it, the defender retreats back towards the goal mouth – ( where the next play will be if the keeper misses the ball ) . If the keeper does not call for it, the defender settles and passes it back to the server. Progress this to where two defenders ( one from each post ) come out each time. 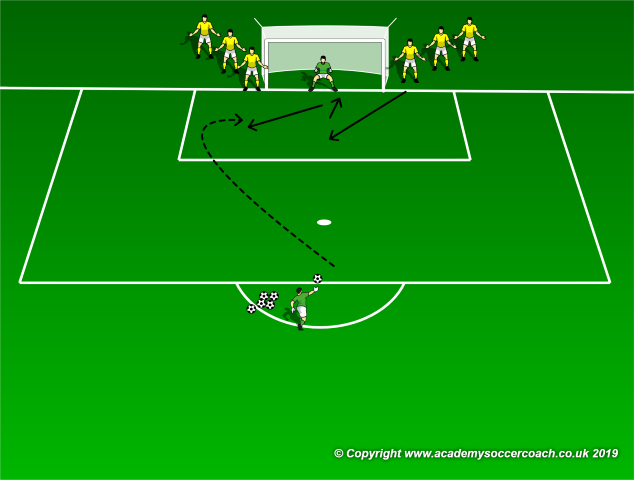 Progression 2
Now add 4 to 6 attackers as well, coming in groups of two. The action here should be continuous after the first ball is served. To start, the keeper sends a ball out to the attackers who are waiting 30 to 40 yds out. When the attacker settles the ball, 4 defenders come out, two off each post. The attacking group has 3 seconds to serve / shoot the ball in – thus the receiving attacker will most likely serve it and the second attacker will crash in to attempt a finish. There is a supply of balls waiting with the other attackers. IF the defense or keeper wins the ball clean, they send it immediately out to the next two attackers. If a shot is missed or the ball is cleared out, the next two attackers take a ball and attack, following the 3 second guideline. Here is the trick – the defenders MUST get back to the post before coming back in and MUST interchange 2 players each time. This will create a lot of movement and chaos in front of the goal, all while a ball is being served in, and is the perfect condition for the keeper to practice creating CERTAINTY by calling the ball and having the defenders step back and cover goal. 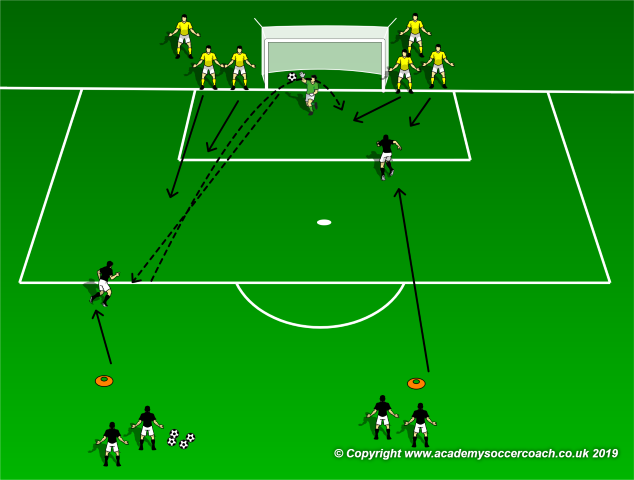 Coaching Points
Progression 2 can be adjusted to create the desired effect – which is balls coming in with several defenders and the keeper attempting to come in quickly and play it. The coach should focus entirely on the communication and corresponding movement between the keepers and the defenders. IF the keeper calls is, defenders step back and cover, keeper makes the play. IF the keeper holds their position in the net, defenders make the play.