I say it all the time, hear it said all the time and even study it quite a bit- yet few of us actually practice it – communication. While good communication is a foundation of success on the field at every level and position, for me it all starts with the keeper. For whatever reason, a vocal forward , midfielder or defender doesn’t always equate to a vocal team but almost always, a vocal keeper creates a domino effect and will improve the communication of all the players on your squad. Perhaps it is because the keeper can easily see and communicate with every one? Regardless of the “whys” practicing communication with your keeper will pay dividends both for them and your entire group. 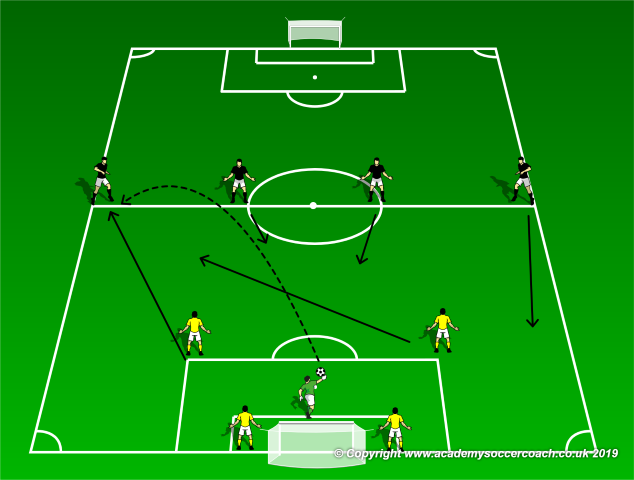 Play starts with the keeper making a distribution out to 4 attackers ( shown above ) spread across the half line ( a cone line can be placed across the top of the defensive third as a starting mark for younger groups ). The keeper always makes the distribution wide to start. Two defenders step to provide pressure and cover, as shown below.

It is now the keeper’s responsibility to tell the two remaining defenders ( waiting on the post ) where to go. Does one double the ball and the other provide balance in the center? Does one provide balance in the center and the other one pick up the wide attacker? This is all up to the coach and keeper but regardless of the plan or style of play, the keeper must instruct the defenders. The coach can set a time for the attacking groups of 4 to possess or create a shot ( 10 seconds per group for example) and groups of defenders and attackers may rotate in and out. Any defensive win or clear restarts play with a new group.

Progression
As shown below, the drill can progress to 6 v 7 by allowing 2 attackers to start as forwards with their backs to goal marked by a line of 4 defenders. An additional defender is placed on the half line with the two final defenders waiting on the posts for the distribution to be made. The idea here is for the keeper to instruct the defender on the half line to either drop in, cover wide, or pressure the ball. Once the wide attacker has the ball, the defenders on the posts may enter play with or without specific instructions from the goalie. 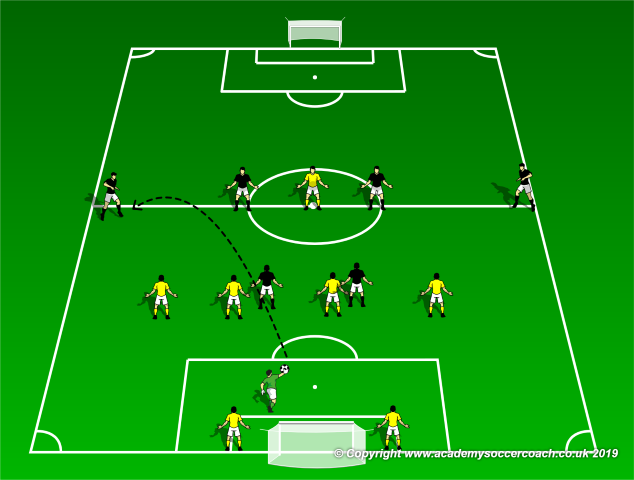 Additional defenders and attackers can be added to make this a half field scrimmage as a final progression, scoring rules for the defense ( possession, clearance out, advancing over the half line ) are up to the coach.

Coaching Points
The coach should work with the keeper on being vocal with the defenders and the pressuring midfielder. As the drill progresses, all the defensive players should be in constant communication based on the keepers initial instructions.