Saving the Ball With Your Legs

Maybe not every game, but certainly every season I have ever been a part of I can remember a great kick save or two. I actually had a keeper several years ago who routinely pulled off amazing kick saves,( most of the time at the expense of the more fundamental text book save) but since he was the only player who would step up and get in goal in a year where I started 7 players on my varsity squad who had never played soccer, I rolled with it. In fact, it was that year I decided to actually practice kick saves with all my keepers as I found it was something many coaches and teams neglected. I discovered a couple sessions each year on kick saves will pay dividends every season, and is usually a fun change of pace for the keepers.

There are two common scenarios where the kick save comes into play: 1. A stab from the standing position when the ball comes into view quickly on the unexpected side, including with deflections and 2. After the keeper has committed to a dive and the ball skips or bends or is deflected past the hands but still across the body to the opposite side. Both these situations can be practiced.

Set Up
As shown below, 3 “attackers” set up to attack the near post but then roll the ball into the far side netting. To start, the balls should come where the keeper can easily “stab” their foot out to deflect the shot. Hopefully, the keeper can slide their foot under the ball causing it to go as high as possible. An attacker is positioned to receive this deflection and pass it to the next shooter. The shooter rotates around the back of the goal to the deflecting position. As the players get a feel for it, have the pace quicken. The shooter can also be given the option to shoot near post as a progression which will force the keeper to stay focused on the traditional save as well as the stab.

Progression
While the stab is not the optimal saving technique, the actual kick save can be. As shown below, have the shooters send a ball into the keeper so the ball can be trapped into the chest. As this is happening, have another keeper throw a ball in which must be kicked away, again, as high as possible. 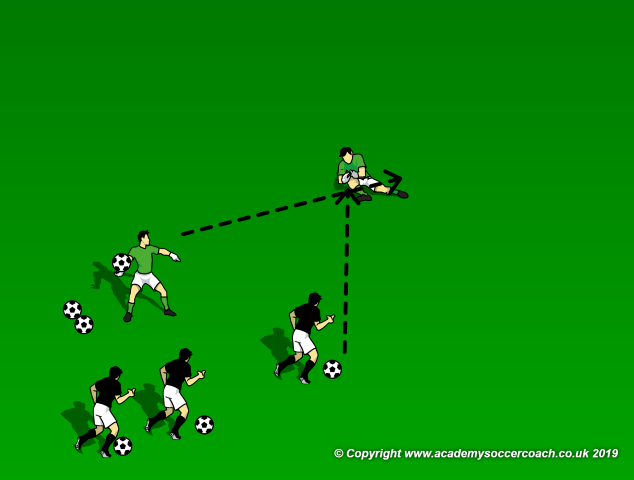 Progression
Finally, position 4 shooters as shown below. The first ( 1 ) shooter takes a shot RIGHT AT THE KEEPER from the PK spot. The keeper holds onto this ball. The second shooter ( 2 ) rolls a ball in on the ground which the keeper must pop up as high as possible. The keeper then drops the held ball and receives a shot from the third shooter ( 3 ) which they must go to ground to save. The keeper holds onto this ball as they will immediately need to make a kick save from a shot from the fourth ( 4 ) shooter. IF the shooters are not accurate enough the balls may be thrown in to start until the keeper has had several reps at each station. When the actual shooting starts, if every shot isn’t perfect so be it, not every shot in a game will be perfect as well and this will also help shooting accuracy on the attacking side. Groups of 4 shooters can rotate in and out to make this a full team activity. 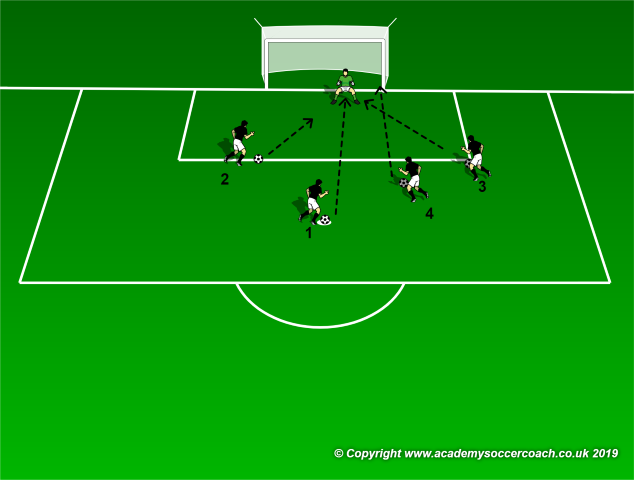 Coaching Points
This is a good change of pace drill to help keepers understand all their options and make sure they are in position to do whatever it takes to keep the ball out of the net. The coach should make sure the keepers feet are active and not flat for the stab save and make sure when the keeper goes to ground the top leg is ready to kick at anything which may get past, this will pay off on match day.