I am a firm believer in the ideals of probability, muscle memory and geometry. I think all of these are key aspects of good fundamental keeper training. However, at some point, a keeper has to be able to rely on their own unique abilities – just like a natural goal scorer – to set themselves apart from the pack and truly master their craft. As coaches we all readily identify those young players who have a natural talent for making circus saves, and then drill the fundamental aspects into them as well. For me, something I always find missing, which we can all start doing with our keepers much earlier in training, is the idea of “ making a read”.

A large part of making good reads involves studying the opponent- especially the shooters. Let me explain it another way : Attacker is coming up the right side and cuts in towards goal just off frame for the shot. The keeper should step out off the near post, cut down the angle and force the shooter to come across their body with their right foot, hoping for an in swinger to get the ball to bend into the far side netting: all while playing to the keepers stronger right hand – advantage keeper. Unless the striker coming up the right side is left footed. This is where we need to encourage our keepers to constantly analyze their opponent’s strengths and tendencies as through this study the keepers will be better prepared to make the right read. In the situation above, shocking as it may sound, the keeper might be better off giving the shooter a bit more of the near post than normal. Additional scenarios where a study of an opponent pays off are corners, free kicks, deep shots and tendency to shoot vs pass/cross. For example: 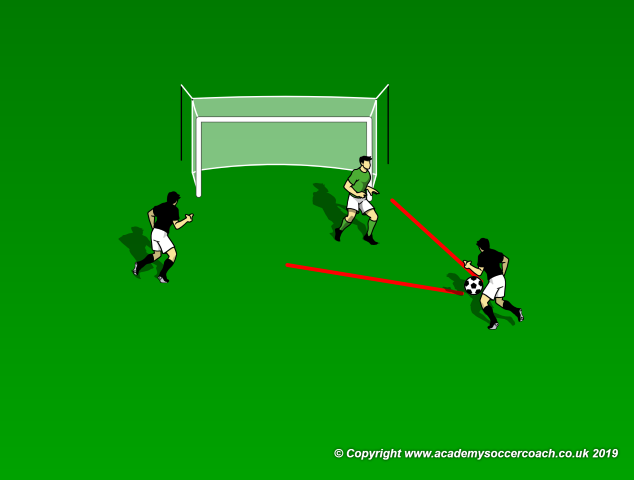 And let me preface ; the idea of letting a keeper make a read is most specifically useful when there are no other options – break aways. Take the scenario above, the red lines represent the approximate area the attacker can use to send the ball towards goal. Cutting off the near post is good, we will say the attacker shoots with their right foot, but what about stepping out? The chance of disrupting a pass here may be better from the keepers current position given the attackers are on a dead sprint, but what about trying to close down the shooter here? What if the goalie knows this attacker has shot the ball 5 previous times, missed all 5, is the leading scorer for the opposing side and is on a 2 game scoring drought? Let the keeper make the read, and more to the point, train them to make the read.

Set Up
As shown below, set up a simple 2 v the goalie shooting drill. While it looks like a lot of space in the diagram, all the activity is taking place from 12 yards in and reflects the space commonly used on a break away. Groups of 2 attackers can take turns running the progression. Play starts with one attacker sending the ball across the box to an oncoming wide attacker. The on coming player receives the ball and may either immediately shoot or pass. IF the pass is made to the player who initially served the ball in, a shot or another pass can be made ( see second diagram below ). 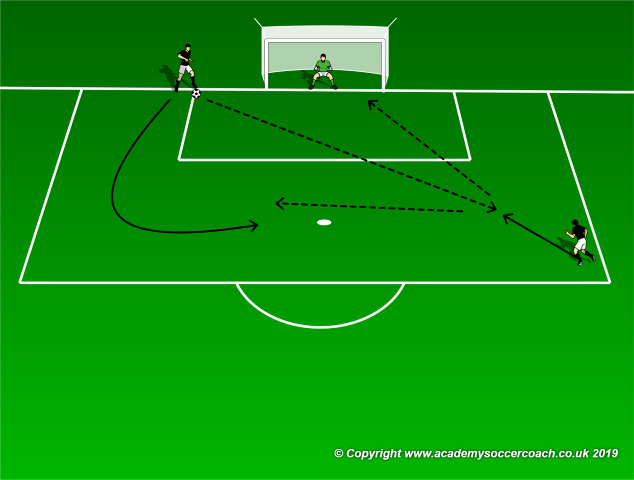 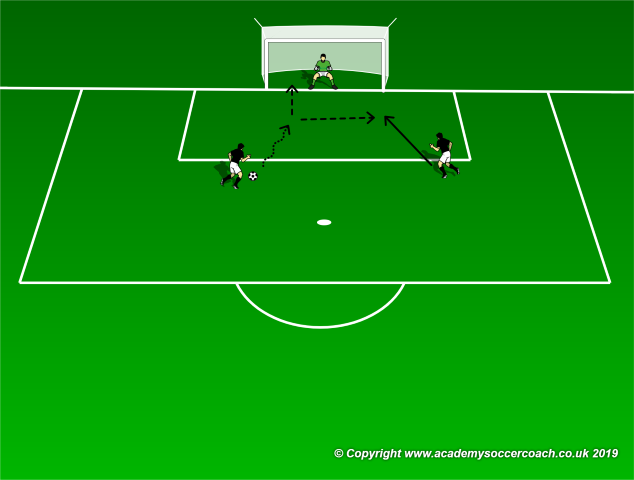 This will put the keeper under some pressure. The idea is for them to make a read, right or wrong, and act. To help, the coach should assign certain shooting groups certain functions, i.e. – one group, even when they switch serving roles shoots immediately from deep. Another group makes one pass and then the shot comes. Another group makes two passes and then another group is free to choose each time. Then the challenge is just working with the keeper on first making a read, then making the right one. Once the keeper has studied the groups – and knows what will happen, the coach can progress the drill and either add attackers, or give the groups a pattern of shooting to follow – first attempt deep shot, second attempt double pass, third attempt deep shot , etc.

Coaching Points
This activity will help your goalies speed of thought and action. Along with this drill, every coach should encourage their keepers to study their opponents, not just during direct games, but during the entire season. In this modern age, the stat monsters get press and this means not just articles, but pictures and video as well. Natural talent, combined with sound fundamentals combined with the freedom and ability to study and read an opponent will help elevate your keepers game “ to the next level”.