I wrote a previous tactical based article on the role of the sweeper keeper in support of an aggressive high pressure attack. While this is not usually my preferred style of play, from a keeper training aspect, many of the points of focus in using the “ sweeper keeper” can help improve overall keeper play and in reality, almost every match has those moments where a keeper who was comfortable moving up supporting possession or attack would have prevented some opportunities for the opponent. Here is an exercise to use in giving your goalie the skills needed to “ sweep” and the scenarios in which they will come in handy whether your keeper is a designated “ sweeper keeper” or not. 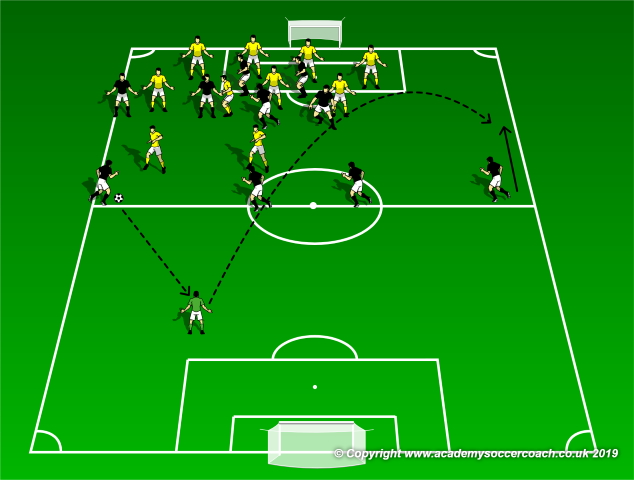 The diagram above shows a common situation where a “ sweeper keeper “ might be used to break down a solid defensive side. Everything is covered and with the traditional switch across the back, a good defensive side is simply going to switch with the ball and the attackers will be looking at the same scenario on the opposite side. Additionally, the wide defender who could be a valid attacking option by switching through the keeper is limited to support with the traditional switch. A good tool to have is to switch off the keeper, who can play cleanly long to the opposite wing in a way which WILL bring the outside back out or allow the switch to be made across the opponents goal via a service – either way a win / win for the attacking team. 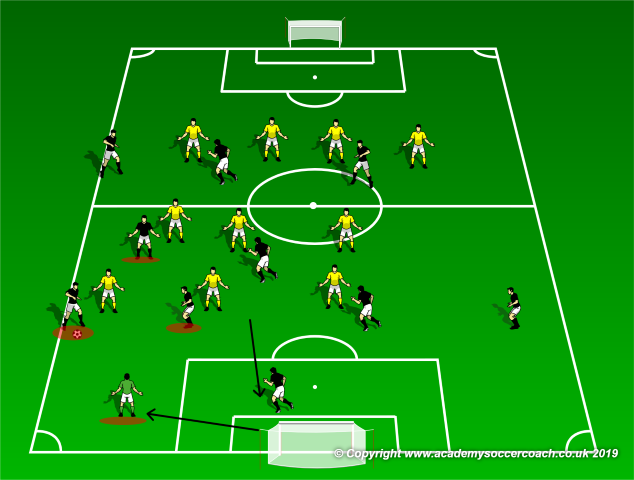 In a page right out of Pep Guardiola’s play book, if your keeper is comfortable stepping out off frame to support deep play, your team will always have numbers up. Also, by using the keeper, the center defender is in a more natural situation and can either hold or ( as shown above ) drop back to offer more cover and support. 99 times out of 100 when the keeper steps out, there will be a 4 v 1 ( as shown in red ) out on the line and the keeper can always simply clear it out if things do not develop or the pressure is too high.

An easy way to work on both the keeper stepping up high and switching play, or just stepping out to support possession can be done with one drill. 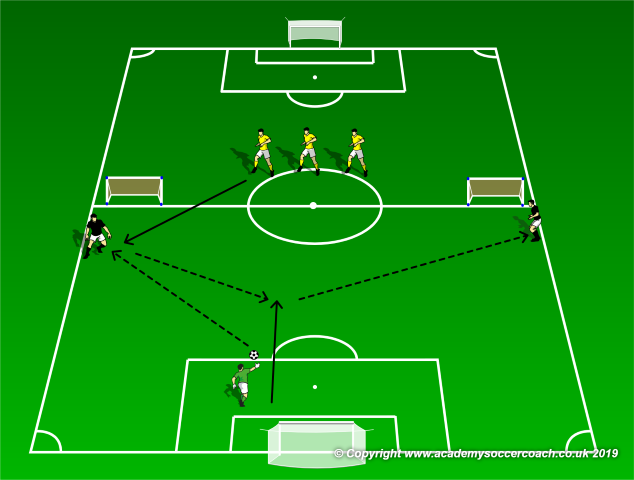 Set Up
As shown above, set up two pug goals ( cones or sticks can be used ) at each corner of the half line. The keeper and two attackers take on 3 defenders to start. The keeper distributes the ball to a wide attacker and immediately steps up to support the switch. To start the drill, the defenders may not close down until the wide attacker has the ball, but the coach may adjust this to increase pressure as the drill progresses. The keeper must switch the ball to the opposite attacker, who can score on the goal on their side. However, the defenders may step out on this attacker as well. Once the switch is made, it is free play for 10 to 20 seconds, defenders may score on the big goal and the attackers may score on either small goal. 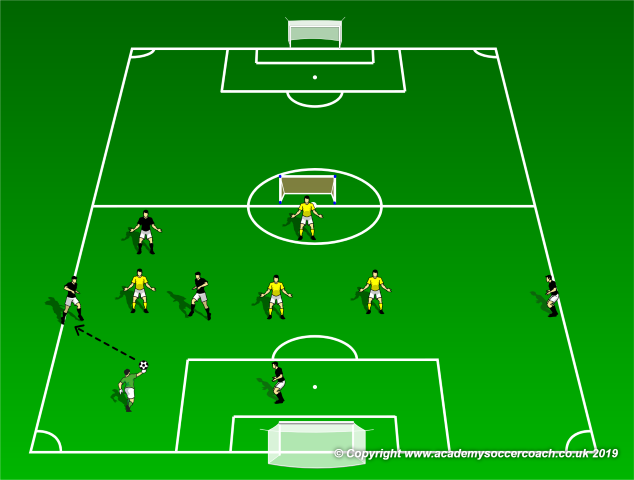 Progression
To work on stepping out off goal to support possession, center up one pug goal, add a defender and 3 attackers and start in a similar fashion, with the goalie out of the box on one side ( as shown above ). Again, the drill starts when the attacker in the 4 v 1 receives the ball from the keeper. The defenders can attempt to win it back and score, but if the keeper stays out for support after making the initial distribution wide, the attacking team should maintain possession.

Coaching Points
While there is a wide outlet, the keepers should resist the urge to force this play across their own goal. Initially if there is trouble, the ball can simply be played out or long up the line. The wide player for the attacking side is simply a decoy anyway and should the ball be hit across the attackers should attempt to shift and set up possession on that side rather than run the wide play right to goal. The idea is to draw out and / or off balance the defense with the extra man the keeper provides.