Aim: To develop the communication between the goalkeeper and the two central defenders when dealing with crosses. 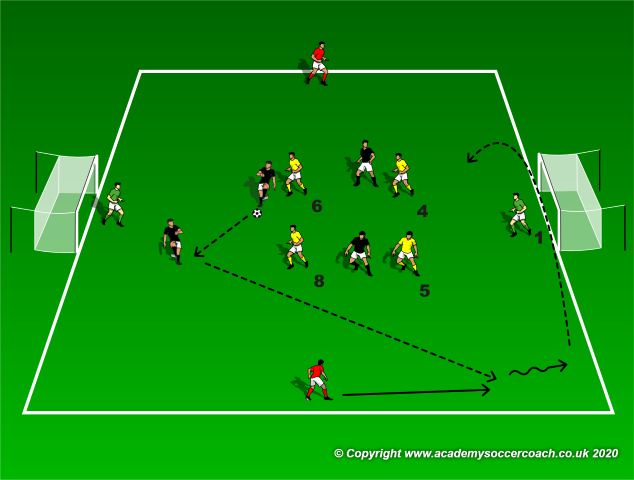 Preparation: The area should measure 40 yards in length and 50 yards in width. Two goalposts are positioned 40 yards apart on each goal line and facing each other. The two teams play in a 1-2-2 formation. A neutral player is positioned on each flank to act as wingers.

Execution: Normal game with positional reference. Goals that come from crosses count twice. All restarts take place from the goalkeeper of the team in possession.

Progression: The neutral flank players may dribble towards the inside and take shots on goal. The crosses may also be played by a player who overlaps the flank player. 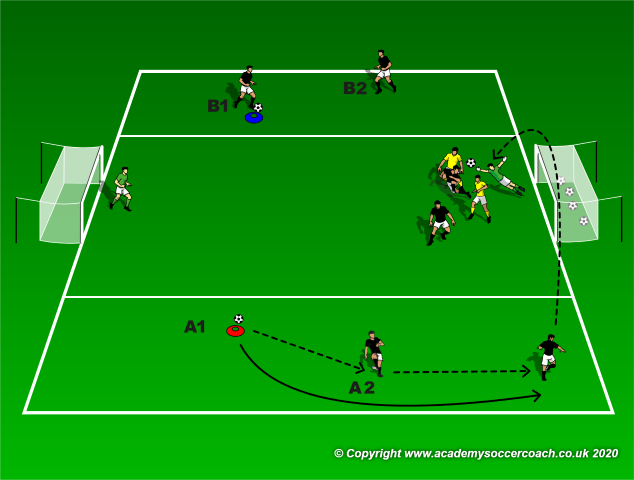 Preparation: The same area as in the game is used. However two flank channels each ten yards in width are marked. On each flank there are two players (A1 and A2 on the right flank and B1 and B2 on the left flank) who are positioned at an angle with each other as shown in the diagram above. In the centre there are two forwards, two central defenders and a goalkeeper. If the defending team (central defenders and goalkeeper) wins the ball they counter on the goal defended by the attacking team.

Execution: The players on the flank combine with each other as shown in the diagram above. A1 passes to A2, overlaps her to receive the ball in space and play a cross to the two forwards to conclude on goal while being pressured by the two central defenders and the goalkeeper.