In this article we will go through the key points learned by observing Sevilla FC’s goalkeeper Yassine Bounou against FC Barcelona in first leg of the Copa del Rey semi-final played on Wednesday 10th of February 2021. Following this brief analysis are two practices that target the development of goalkeeping soccer-related actions timed and performed according to the necessity of the situation.

Griezmann is outside the penalty area with the ball and has space to lob it behind the back line and towards the second post for Messi to finish on goal. As we can see from the above image the goalkeeper’s position is on the imaginary line (dotted line) between the ball and the middle of the goal. The goalkeeper’s stance is low, on the balls of feet, with the arms in front and on the side of the body while the body is slightly inclined forward.

Griezmann lobs the ball to Messi to finish on goal. The goalkeeper moves to cover the angle using quick lateral footwork. His is still on the imaginary line between the ball and the middle of the goal.

As Messi is going to shoot, the goalkeeper makes a few steps forward, making himself big so to narrow the angle for Messi.

The goalkeeper remained on his feet until the last moment. The arms and legs were also used to stretch the goalkeeper’s ability to cover more area of the goal . 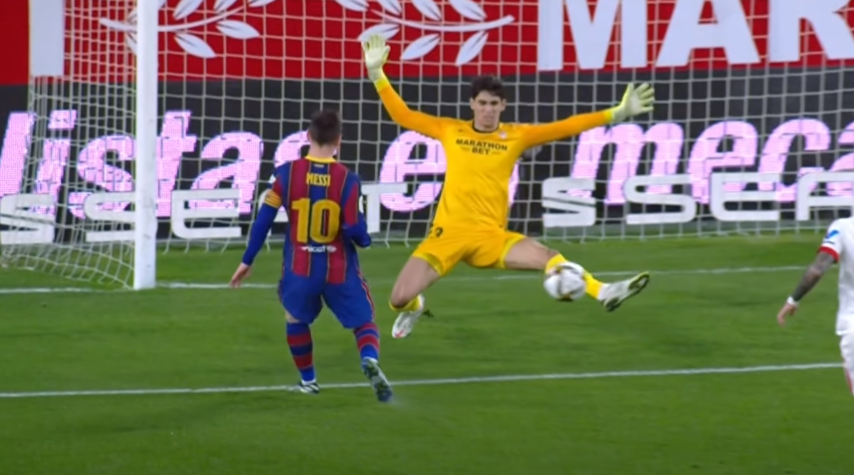 The goalkeeper making himself big to reduce the shooting angle.

Practice 1: Close down the angle 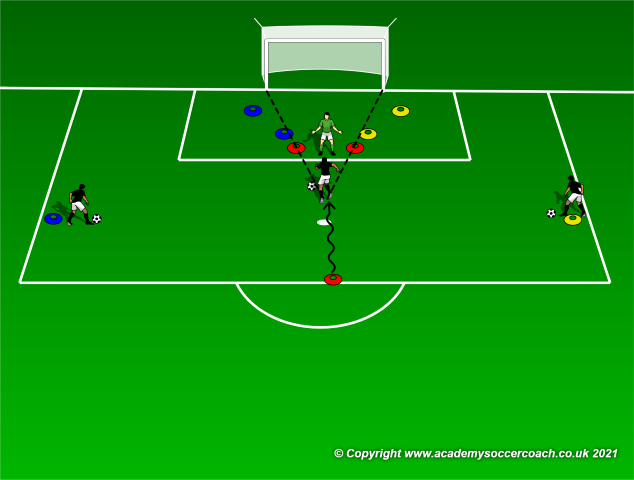 Procedure: The coach calls one of the three players positioned at their respective starting point to dribble forward. The goalkeeper must protect the respective gate from the player’s shoot. If the goalkeeper covers the gate well it means that the ball cannot end up in the back of the net.

Key outcomes:
1. The goalkeeper comes out of the goal as the player is dribbling towards the goal.
2. The goalkeeper makes a forward explosive movement to cut off the angle at the moment the player drops his head to shoot at goal.

Practice 2: 3v2+GK play the ball behind the back line. 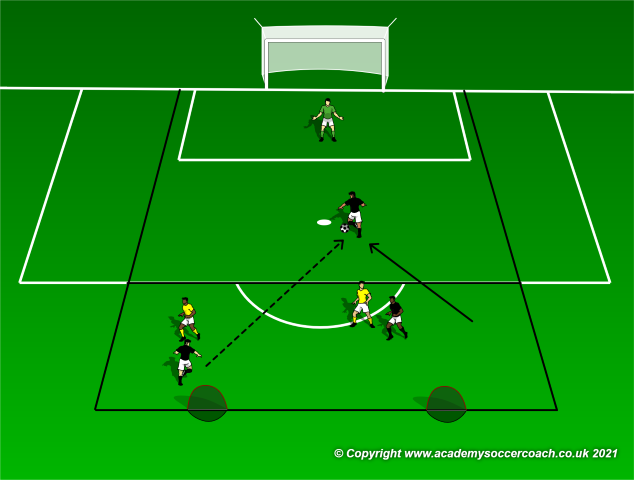 Setup: An area measuring 10 by 18 yards is marked at the edge of the penalty area. The sides of this area are extended till the goal line. At the end of the area two mini goals are positioned. Three attackers and two defenders start in this area while a goalkeeper is positioned in goal.

Procedure: The attackers start against the defenders in a 3v2. The attackers must pass the ball into the penalty area to finish on goal. The attacker receiving the pass must finish with a first time shot.

Key outcomes:
1. The goalkeeper comes out to take the ball or block shots for passes that are played deep.
2. The goalkeeper remains in his position but moves to reduce the shooting angle for the attacker in cases where he cannot get to the ball.
3. The goalkeeper must always be on the imaginary line between the ball and the middle of the goal.

Progression: The attacker receiving the ball can decide not to shoot first time and to also try to go around the goalkeeper. 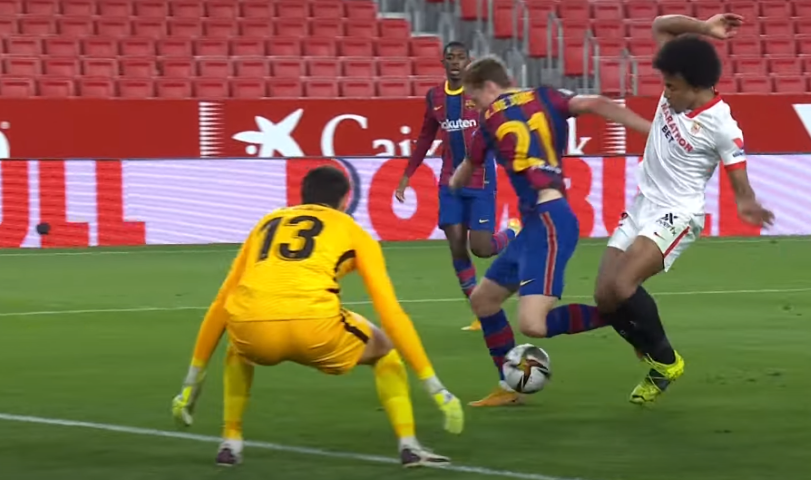 In the above image, the defender is applying pressure on the ball-carrier. The goalkeeper therefore remains on his feet and move accordingly to close down the shooting angle.